In Ireland, it rains a lot.

It’s one the things we’re known for. One of the frequent comments I get when people over here find out I’m from Ireland is:

To which I reply, in my most hammy Irish accent:

“Ah sure, for the love of Jesus, Mary, and St Patrick himself, where would we be getting all the green from if it didn’t rain?”

It rains a lot and the Irish people have come to accept their lot in life and prepare accordingly.

In San Francisco, it doesn’t rain a lot.

In fact, we are in the midst of a four-year drought- the worst in 500 years apparently. It’s so severe that water wastage vigilante groups have cropped up all over the city, lurking outside bathroom windows, hunting down anyone who may be reckless enough to leave the tap running as they brush their teeth.

(Not really…but I personally wouldn’t want to risk it.)

So, when it does rain (as it’s been doing this week), it’s kind of a big deal. In fact, it’s more than just a big deal – it’s ABSOLUTE and EPIC CHAOS. 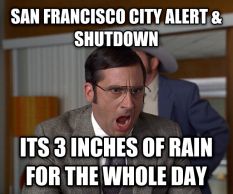 When I first arrived in the city, I played the smug and chiding Irish person, as I listened to my Americans friends bemoan and be-wail an upcoming rain storm.

I would exclaim (again in my best hammy Irish voice):

“Ah sure, for the love of Jesus, Mary and St Jude the Patron Saint of desperate causes, there’s nothing to be despairing about here. Sure, ’tis only a bit of auld rain…”

(Note, my Irish accent is actually not that Irish, nor is my lingo, thanks to a Canadian mama. Sometimes the crowds just expect it, and who am I to disappoint.)

And so, suitably admonished, I held my hands up and hopped on the bandwagon. Hunter rain boots were purchased and worn everywhere. Plans were canceled on rainy evenings and if I did have to go out, I’d dress in full on wet weather gear (albeit sexy wet weather gear – I’m not an animal). I participated in, and even initiated, fear-mongering conversations about the rain.

I had transformed into a fully fledged, rain-fearing Californian.

And it was only when my Irish-living-in-Ireland friends and I visited Portland, did I realise this. In Portland, it also rains. Maybe as bad as Ireland. In the lead up to the vacation, my Irish-living-in-SF friend Mags and I worked hard to plan a weekend’s worth of outdoor wandering and hiking, naively expecting the blue skies and sunshine we’re used to in Cali.

When, upon arrival, we were greeted with clouds and drizzle, we went straight into panic mode- frantically googling ‘Things to do in Portland when it rains’ and looking up the nearest Hunter rain boot stockist. We were just on the verge of pitching the benefits of a day spent visiting the Historic Belmont Firehouse, when I noticed my friends looking at us like we were mad.

“The drought’s gone to your heads girls. We’ll be grand. Sure ’tis only a bit of auld rain.”

And with a toss of their hair, clicking their umbrellas open, they stepped outside.

Suddenly the spell was broken – so stoic, so…regal was their acceptance of the rain and its consequences. It was mesmerizing. I used to be like that – what had happened to me?

Here’s the truth – SF really can’t handle the rain when it comes. The infrastructure is not set up for it. So it is kind of miserable.

But here’s another truth – the rain is also kind of beautiful. Especially when you’re on the tail-end (hopefully) of a really long drought.

Over the past week I’ve started noticing the lovely things about it – the steady patter against the skylight as I fall asleep, the rivulets of tiny drops on the window pane as I ride the bus into work, the ominous black clouds as they roll over the horizon, the sudden and striking verdant green of the city hills.

Rain has been glorified for centuries – how many movies have played out their finales against rain-soaked backdrops, how many novels have used rain as an analogy for inner turmoil? Not to mention the millions of rain-scented bath products and stormy soundscapes on offer.

Ultimately, rain is good, and nothing to be feared. I’mma stop complaining so vociferously about it.